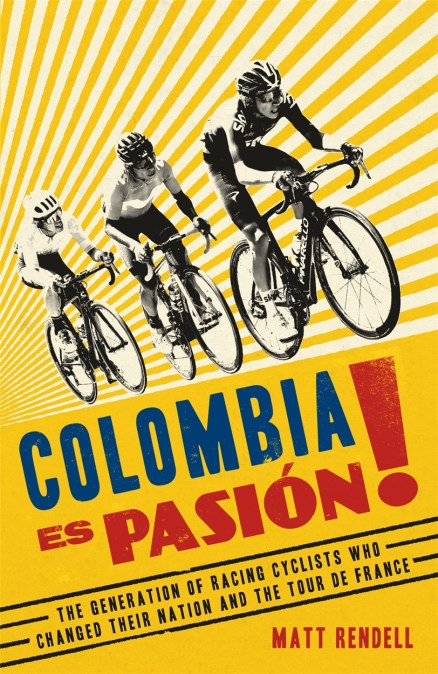 Rapid Transition Alliance contributor Matt Rendell’s new book, Colombia Es Pasión, was awarded ‘Cycling Book of the Year’ 2021, and it is about much more than cycling, which is why we are featuring it here. In his work as a journalist, Matt produced the first filmed report about climate change during coverage of the Tour de France during 2021. His book and the story he reports for the Alliance, weaves together the story of the indigenous cultural revival of the Muysca people of Suba in Colombia, with the transition to more sustainable living. Matt came to the topic through the elite racing cyclist Nairo Quintana, who is probably the best known international Muysca advocate. We had a quick word with Matt after winning his book award about some of the issues raised, here are his reflections.

Cycling in Colombia is unique: the sport has associations with the traditions of the country’s millions of peasant farmers. The great Colombian cyclists almost invariably come from peasant farming families, and their sport reflects their use of the bicycle as a means of transport, the physicality and long hours of their labours in the fields, the simplicity of their technological resources, and their distinctive rustic cuisine of sweet corn “arepas”, sugar cane “panela,” sticky guava “bocadillo”. Cycling somehow re-interprets all these symptoms or symbols of rural underdevelopment into the language of sport, which is that of modernity itself. It somehow gathers up the peasant identity, which many Colombians regard as their inner, most “authentic” self, and reframes it in a way that modern, “developed”, urban mentalities find acceptable and endorsed by the imprimatur of global sport.

The effect is of a kind of double-exposure of two different views of the same object: one shows it as simple, intimate, deeply felt and perhaps inward looking – a sort of discrete, understated, black and white image – while the other, glossy, glamorous and “global,” shows a swanky sporting scene with pounding music and subliminal, “meaning-of-life” bass notes.

Read Matt’s account of the lessons for transition from the current Muysca cultural revival here.

Because of all this, cycling has been a unifying element in the national imagination since the 1950s. In fact, the first national Tour of Colombia in January 1951 took place during a period of widespread civil unrest that is known to Colombia historians simply as La Violencia. Between 1946 and 1958 perhaps 180,000 were killed and two million were displaced – impossible conditions for a national bike race. Yet, in a historical paradox that says much for this country of surprises and cycling’s place in it, the first Vuelta a Colombia went ahead as planned in January 1951. By winning it, Efraín Forero became the country’s first cycling superstar. Zipaquirá was already well known for its salt mines, which had made it a major economic centre even before the Conquistadors arrived.

Indeed, despite their skill as gold, silver and copper workers, the indigenous Muysca people are thought to have used the town’s salt as currency. Efraín Forero indelibly associated the town with something else: cycling prowess, manifest in his nom de guerre ‘El indomable Zipa’ – ‘The Indomitable Zipa’ – a Zipa or, more properly, a Psihipqua, being, or having been, a Muysca leader of such intense spiritual power that he could only be approached backwards: to behold him face-on could leave the reckless supplicant blind or worse.

There is a case to be made that the early Tours of Colombia did not just capture the national imagination, they proved there could be such a thing. They allowed a nation to reveal itself to itself, opening new horizons to communities that could see no further than the view from the nearest hilltop. So, on Wednesday 7 August 2019, it was with a sense of closure, or of completion, that Efraín Forero, aged 89, joined his fellow townsman Egan Bernal on stage in the town’s Plaza de la Independencia to celebrate Bernal’s 2019 Tour de France win. Colombian cycling had come full circle.

Trying to understand what a piece of mass culture like a particular sport means to a community as large and diverse as an entire nation is an enormously complex operation, but it is what I attempted in my first book “Kings of the Mountains” twenty years ago, and I have tried to do so again in my latest publication, “Colombia Es Pasión.” It entails repeatedly switching perspective and frame, from the grand sweep to the telling detail, from the individual life to the great collective shared experiences, and broader chunks of national history.

Cycling has nowhere to hide from the climate emergency

In my most recent book I found myself compelled to place my subject against the backdrop of the natural world, for a number of reasons. One is that cycling is an outdoor sport, and as such it has nowhere to hide from the climate emergency. The first Colombian win in the Tour de France, in 2019, took place in a race dominated by the weather. As the 2019 Tour entered the Alps, eighty of France’s ninety-six mainland departments were on severe weather watch. Then, on stage nineteen, bound for Tignes in the Alps, a convective storm sat over the race and produced so much hail that it flooded the valley before the final climb, then triggering landslides that blocked the stage. The 2019 edition was the first unambiguous ‘climate emergency’ Tour de France.

But the climate emergency is just one of the many almost cosmic-scaled frames that contextualise our lives today. The current mass extinction event is another unavoidable point of reference, especially for Colombia, where everything seems to flourish here in preposterous abundance: the country is said to lead the world in flowers and bird life, lie second in the rankings of butterflies, fresh-water fish, tropical amphibians and plant life, third in palm trees and reptiles, fourth in mammals, and on and on and on. Yet, sadly, the mercury and cyanide used in illegal mining ventures are wreaking havoc in some of its richest and most fragile ecosystems, while the peace process has cleared many of its vast forested areas of the old, established rebel groups, allowing illegal timber cutting to proliferate.

Another context that cannot be ignored is global catastrophe which we might call ‘The Great Forgetting.’ Many of Colombia’s great cyclists have indigenous backgrounds: Nairo Quintana, three times a podium finisher at the Tour de France and for half a decade Chris Froome’s fiercest rival, is proudly Muysca. His former teammate Darwin Atapuma is Pasto Indian, as is the new Olympic road champion Richard Carapaz, from just over the border in Ecuador. All three agree that the old ways are dying now, and within a generation tens of thousands of years worth of indigenous knowledge of plants, systems and the cosmos will be irrevocably lost.

Sadly, as elite athletes, it is almost impossible even for riders of indigenous heritage to avoid contributing massive amounts of greenhouse gases to the atmosphere. A chaotic international calendar means that air travel and vehicle use proliferate, contributing to the very weather extremes and depletion in air quality that make some stage races look increasingly gap-toothed.

The bicycle itself though is part of the solution, and it is an absurd contradiction that elite road racing which does so much to promote it, is so carbon heavy. Measures are needed to reduce its carbon footprint, but to do so with justice, so that the benefits of development are not reserved solely for those nations that already enjoy them. Indigenous cultural revival and re-enchantment with nature: the journey of the Colombian Muysca people

This story weaves the indigenous cultural revival of the Muysca people of Suba in Colombia, together with the transition to more sustainable living. It is...

Matt is a cyclist, journalist and author. His new book, Colombia Es Pasión, was awarded ‘Cycling Book of the Year’ 2021.